Zen and the Art of DNF

ZEN AND THE ART OF DNF

I recently read a blog post at ultradanners.blogspot.com. It was written by my friend Daniel.  To me, he is kind of a legend.  He has done some pretty amazing stuff. And by pretty amazing, I mean some FREAKING hardcore races.  This guy just finished a 200 mile footrace in the mountains.  He has done the Arrowhead 135, a 135 mile footrace in Minnesota in the dead of winter.  He’s done it several times. He has finished many 100 mile races and a bunch of other really hard stuff.  I feel like a baby ultra runner next to this guy.  Yet he treats me like a respected colleague. He is signed up for Iditarod 350.  That’s a 350 mile footrace across Alaska on the Iditarod trail, alone in the winter.
In his blog post he wrote about a 100 mile footrace he recently attempted.  His race  did not go the way he had hoped.  He said (what I sometimes feel at races) “The negative thoughts were relentless.  I wanted to quit. The feeling of being a fraud and not belonging there overwhelmed me.  I was regressing and had no answers.  Frustration and disappointment continued to grow.”

Part of his blogging project (like mine) was to be more open, sharing new thoughts and experiences.  I don’t know why it shocks me that other people have these same feelings.  I’ve had several DNF’s (Did Not Finish) at ultra distance events.  I’ve been out there struggling to not drop from a race.  I felt guilty for being so selfish and wasting everyones time.  It upsets me to think my husband took time off from work and my dogs are in the kennel when I could be home with them.  I’ve spent money on gas or plane tickets, hotels, race entry fees all for nothing.  I’ve told myself that maybe I’m not cut out for this or that I’m weak because I’ve quit a race.  I have felt like I would disappoint my friends and family by giving up. I also have felt like a fraud, that I wasn’t cut out for this stuff.  I have felt that the race distance was too big an obstacle for me to suffer through.  Yet, somedays after all that suffering, you can still push yourself back out there and suffer some more and still quit later.  I have even more than once wished I could just have an injury happen on the trail just so I could stop running and have a good reason to quit.  Who thinks like that?  I have when I was at my lowest point during a race.  I know times like those, I’m just depressed and not thinking rationally.   I’ve at times had a whole box of excuses specially wrapped up just so I could call it a day and be done with that race.  Sometimes I open that box and pull out an excuse, other times I leave it wrapped up and put it back up on the shelf.


A few weeks ago, I ran a race with my friend Sue.  In preparation we had been running trails weekly as part of her training for a trail 50K.  It wasn’t going to be her first 50K but it had been a long time since her last one.  We trained in rain, heat, more rain and more heat.  But come race day it was a deluge. It rained harder than I’ve seen in a long time.  We got to the half marathon distance and called it a day.  We both really wanted to get the 50K done but the weather was do bad that the trails became too unsafe to run on.  The steep drop offs on muddy, slick trails were just an injury (or worse) waiting to happen. The water runoff on the trail was so bad that it actually had a current.  The river even started to overflow its banks. It was difficult to make the decision to stop so early at a race, but we both knew the chance of an injury was likely to happen.  There is a fine line between toughness and stupidity.  The decision to stop was easier for me than for Sue.  She had more riding on it.  I knew she would feel the same way I felt after my first DNF.  But I knew she would later be happy knowing that she could live to run another day and not be dealing with a long term injury because of being stubborn and continuing to run.

What this all boils down to is what most people haven’t dealt with.  That when a runner gets a DNF or a time that is not what they want...most of the world does not care.  Their friends and family are happy that they made the “right decision” and did what was best.  They stopped their race because of lighting, rain, snow, downed power lines, flooding, wild animals, or just because they didn’t want to keep going.  I stopped at mile 50 of a 100 miler race once and my only reason was that I just wasn’t having fun.  I didn’t enjoy it that day.  My parents, brother, husband, dogs, are not nearly as upset about a DNF as I am.   They are as happy for my victories as I am.  But they also can understand why I stop and are glad that I have the sense to do that sometimes.  They never ask me why I didn’t try harder.  They know that I already gave it all I had that day.  Another day I may have more.  But that day, It was all I had.  And that was enough. I’ve realized that I never disappoint anyone but myself.  My husband will always be happy that I got as far as I did, that I was uninjured and he knows I’ll try it again some other time.


In the meantime, Daniel, Sue and I all continue to seek a way out of our own ruts.   I hope that Daniel will see that while sometimes he sees himself as a fraud, that others see him as a source of inspiration. That Sue will know that she was smart and did the right thing by stopping her race when she did. She will achieve all her goals, but it will have to wait for another day.

If you are an ultra runner and you haven’t yet DNF’d, they you just haven’t run enough races, because sooner or later it  will happen. DNF’s are more typical in ultra running than in shorter races.  There is no guarantee you will make it to the finish.  I have regretted dropping out of some races and wished that I just sat down and took a break instead of turning in my bib. I’ve been through the wringer at races and quit based on my emotions before and I probably will again.  But I grow from it, I learn from it and I’m more at peace with it when I do. Sometimes the DNF even motivates me to try harder at the next event.


I am very thankful for all my race finishes.  I appreciate the 5K all the way up to the 100 mile finishes.  I've finished way more races than I've DNF'd.  But I have also had some pretty wonderful DNF’s.  I’ve DNF’d 50k’s, 50 miles, 100k’s, 100 miles, even 200 miles.  I’ve met some awesome people, seen some pretty cool parts of the country that I would never have otherwise seen, and ran some beautiful trails.  I’ve enjoyed almost all of it, even if it winds up with as a DNF.  My most spectacular DNF was at  mile 128.66 of that 200 mile race.   It was the most beautiful failure I have ever had.  Yes, I remember it all the way to the .66 of the mile.  I never round it up or down.  It was my beautiful DNF.  I gave everything I had until the point that I knew I was either going to be injured for a long time, or I would survive and live to run another day.   So I stopped there.  I love to say that I DNF’d a race at 128.66 miles because it makes no sense to most people.  But to me, it makes all the sense in the world. Sometimes, we just need to be stubborn in a smart way. 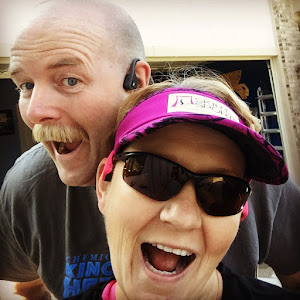